i-could-have-written-that* is a practice based research project about text based machine learning, questioning the readerly nature of the techniques and proposing to represent them as writing machines. The project includes three writing-systems: writing from Myth (-1.00) to Power (+1.00), Supervised writing & Cosine Similarity morphs. These translate technical elements from machine learning into graphic user interfaces in the browser.

The interfaces enable their users to explore the techniques and do a series of test-runs themselves with a textual data source of choice. After processing the textual source of choice, the writing systems offer the option to export their outputs to a PDF document.

* The title i-could-have-written-that is derived from the paper ELIZA--A Computer Program For the Study of Natural Language Communication Between Man and Machine, written by Joseph Weizenbaum and published in 1966. 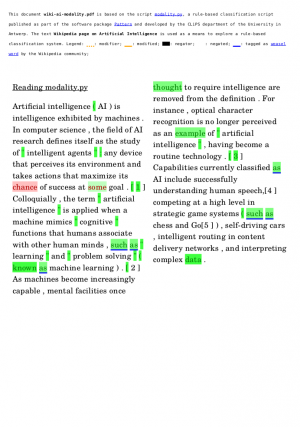 The writing-system writing from Myth (-1.00) to Power (+1.00) is based on a script that is included in the text mining software package Pattern (University of Antwerp), called modality.py. This rule-based script is written to calculate the degree of certainty of a sentence, expressed as a value between -1.00 and +1.00. The interface is reading tool for this script, that highlights the effect of rules that are written by the scientists at the University of Antwerp. The interface also offers the option to change the rules and create a custom reading-rule-set applied to a text of choice. It's a poetic translation exercise, from an interest in a numerical perception of human language, while bending strict categories.

To overcome these expenses, rule-based programs have been massively replaced these days by pattern recognition techniques such as supervised learning and neural networks, where the rules of a program are based on patterns in large datasets.

The sources used for modality.py are academic papers from a dataset called 'BioScope' and Wikipedia training data from CoNLL2010 Shared Task 12. Part of this dataset are 'weasel words', words that are annotated as 'vague' by the Wikipedia community. Examples of weasel words are: some people say, many scholars state, it is believed/regarded, scientists claim, it is often said.

In the script, the concept of being certain is divided up in 9 categories:

after which a set of words is connected to each category, for example this set of nouns: 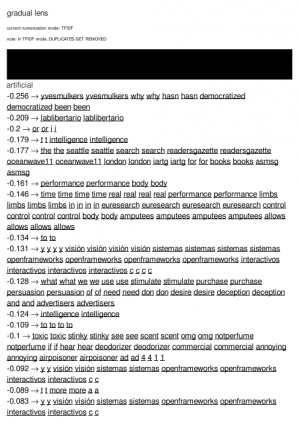 The writing system Supervised writing is built with a set of techniques that are often used in a supervised machine learning project. In a series of steps, the user is guided through a language processing system to create a custom counted vocabulary writing exercise. On the way, the user meets the bag-of-words counting principle by exploring its numerical view on human language. With the option to work with text material from three external input sources, Twitter, DuckDuckGo or Wikipedia, this writing system offers an alternative numerical view to well-known sources of textual data. 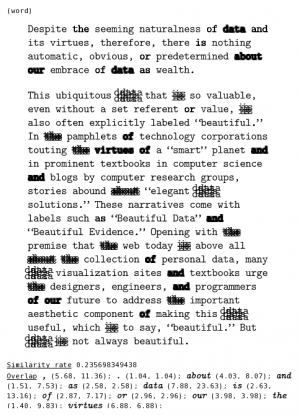 The writing-system Cosine Similarity morphs works with unsupervised similarity measurements on sentence level. The textual source of choice is first transformed into a corpus and a vector matrix, after which the cosine similarity function from SciKit Learn is applied. The cosine similarity function is often used in unsupervised machine learning practises to extract 'hidden' semantic information from text. Since the textual data is shown to the computer without any label, this technique is often referred to as 'unsupervised' learning.

The interface allows the user to select from a set of possible counting methods, also called features, to create a spectra of four most similar sentences. While creating multiplicity as result, the interface includes numerical information on the similarity calculations that have been made. The user, the cosine similarity function, the author of the text of choice, and the maker of this writing system, collectively create a quartet of sentences that morph between linguistic and numerical understanding of similarity.